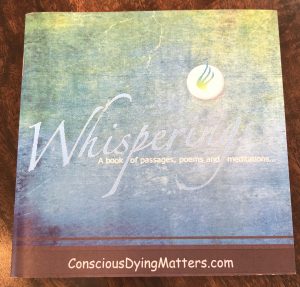 This book has been lovingly compiled by many souls who have sent us the words that have brought them peace and comfort.

It is our intention that you are guided to the passages to support and hold you at this time.

Whisperings is a a book of passages, poems and blessings and is available for $2.50. Please email Barbara for purchasing information. liphebalance@gmail.com

In his groundbreaking and thought provoking book, Rebirth Into Pure Land, Robert not only tells of the death and “rebirth” of his daughter, Shamara, but clearly explains the stages of immanency in its physical, emotional, and spiritual dimensions.  This is the pivotal material Robert elucidates and elaborates on in his teachings for the Alliance.

We love this book as it is about fully living till your last breath and acknowledging that the awareness of our mortality enhances our life for every precious second.

Amazing account of end-of-life experience and what really matters in the end.

Words of wisdom on living well and dying consciously.

A classic to be read prior to death and practiced when transitioning.

A book that explores all aspects of end of life, from teh emotions to the legalities. A wonderful thorough education.

Life After Life: The Bestselling Original Investigation That Revealed “Near-Death Experiences” by Raymond Moody, M.D.
Raymond Moody, M.D. was the first to explore the phenomenon of near-death experiences, and to give it a name. His book, from 1975, delves into the common themes that emerged, the medical impossibility of these experiences being powered by (flat-lined) brains, and what he believes they point to about the afterlife and consciousness.

In 2008, academic neurosurgeon, Dr. Eben Alexander, suffered from a severe case of bacterial meningitis, which rendered his brain effectively dead and put him into a coma for a week. In Proof of Heaven, he describes an incredibly vivid and deep near-death experience—an episode he would have dismissed as a mere hallucination if it had been relayed to him by a patient. This is a fascinating read, both for what it reveals about consciousness and our purpose here in life, but also for its in-depth analysis of what was happening medically during the NDE, from the point of view of a neurosurgeon who is otherwise intimately familiar with the workings of the brain.

This is an amazing book to discover our true nature and show that love is the answer.

A wonderful compilation of sacred stories and poems from cultures around the world to assist in approaching transitioning.

The Buddhist approach to death can be of great benefit to people of all backgrounds—as has been demonstrated time and again in Joan Halifax’s decades of work with the dying and their caregivers. Inspired by traditional Buddhist teachings, her work is a source of wisdom for all those who are charged with a dying person’s care, facing their own death, or wishing to explore and contemplate the transformative power of the dying process. Her teachings affirm that we can open and contact our inner strength, and that we can help others who are suffering to do the same.

A practical guide to grieving the best way for yourself.